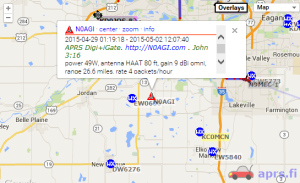 The N0AGI terrestrial APRS digi/igate has evolved over the last several months – I think in a positive direction to better serve the APRS community at large here in the SW/SC/SE Minneapolis and the neighboring IOWA State proximities. Over the last few months, I have been playing around w/ my hardware a bit to fine tune, Rx of packets from sensitivity standpoint, Tx from digi standpoint and iGating logic/settings on my igate standpoint.

Several radios were put into test to this end-goal; YAESU FT-2900D, FT-897D, FT-857D and Kenwood 710GA. Each of these radios has its own merits.  Here’s a quick summary of my findings report from my experimentation:

In my case I have a separate digi and igate standalone module made by Microsat. I leveraged my Kenwood as a packet pre-processing radio (w/o engaging the built-in digi and APRS engine) and then connecting it to the Microsat digi/igate.  This has been working really consistently well.  The pre-processing takes the “noise” of Rx packets out of the equation. Which means that the incoming packets have a consistent noise-free wave form that can acted upon quickly. It also eliminates the need to manually massage the incoming packets before sending them over to the digi/igate.

The Kenwood 710GA also can take the incoming packets, no only pre-process and send them over to the digi/igate nicely, it also can sniff those packets internally and show a dashboard of incoming packets rendered as parsed APRS data by engaging the APRS engine. In my case, I chose to not do that for the reason that I wanted to free up the processor’s cycles. I do however, engage its APRS engine once in a while to monitor incoming packets right on the Kenwood 710GA display. Also, I have disabled the Digipeater, TNC functionality on the 710GA since all of those operations are handled by the standalone digi/igate.  This setup has been working really well. And, I think I will want to leave this one running for a few weeks and then analyze its performance based on the performance data.

The other part of the hardware setup is of course the antenna.  Up until 3 weeks ago, I had my Comet GP-9 antenna sitting at about 55ft above from the ground level. This had worked well since Sept 2014. In the last 3 weeks, I had heightened the elevation a tad bid to reach 75ft now above ground level.   And, also had modified the antenna base structurally.  I had someone help w/ installing the antenna over a single mast/pole. And, have it go through my roof into my attic.  Was a scary initiative.  I am monitoring as to how well this installation will hold up from the winds, rain, etc.  Sufficient care was taken to ensure we sealed the entry way into the attic for weather proofing.  I see some swaying of the mast during windy days (note that I don’t have the tripod any more). So, I am having to make a few redoing of further securing the antenna mast to minimize the swaying, etc. The pictures of the antenna installation project can be found here in my “Antenna #1” pages soon.

Back to the terrestrial APRS topic, to summarize, after moving my new setup to Kenwood 710GA onto my Microsat digi/igate and then on to my new Comet GP-9 installed antenna, I now see a good coverage improvement. The following are a few pictures of the current JIT coverage of the station as of right now.

Thanks for reading and 73, N0AGI 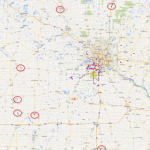 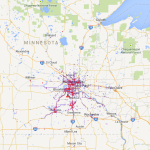 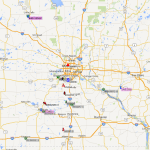 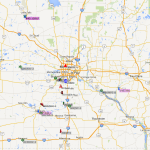 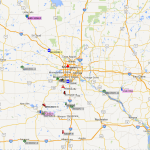 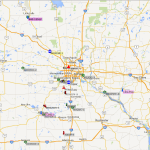 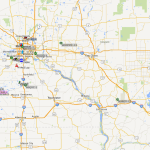 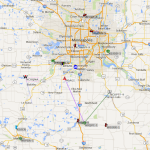 This page details the rig setup, software and hardware components of what makes my APRS Digi and iGate operations on the air; currently found at the APRS.FI web site. I have had my APRS Digi and iGate for about 6 months now and have been serving the South-West Minneapolis Area covering approximately, 250mile radius (+/- 50 miles). Sometimes, my Digi has had the opportunity to respond to and 3 to 4 hops APRS packets and from there on, my iGate would pick it up and report the packet over into the APRS-IS servers. To date, I have had approximately 16K-20K packets responses and services per month on an average. Prior to my 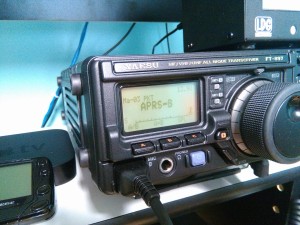 The following pictures should give a better idea of the shack.  Currently, my YAESU FT-897D might be a bit of an overkill for this particular type of a service, soon therefore, I will be substituting it w/ a lighter scale/duty 2m packet enabled 50W radio.

The Microsat Digi/iGate product is a phenomenal product – made in Poland. I must say, it does a fantastic job of injecting, processing and handling the packets really seamlessly well. And, w/ a simple to use user interface.  Now, here’s a BIG problem – not w/ the product, but, with the company that makes (not sure if they still active anymore).  The support forum is completely dead and silent.  The manufacturer’s activity on the forum is gone down to absolute zero.  It is really sad that such a great product has not been given enough attention and focus to growth and future innovation.  I truly wish and hope that they revive themselves back and kick off their business again.  I was hoping to buy 2 more of these Digi/iGate units for other projects, but, am very hesitant because of the lack of support and really any form of communication. 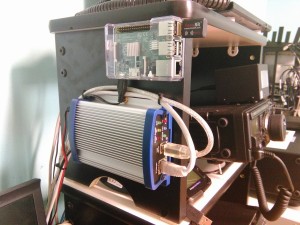 The Delta-4A switch does a pretty good job w/ low loss.  I will share more specs later. I will pause writing here for now.

Please review the pictures and my setup and kindly comment.

This site uses Akismet to reduce spam. Learn how your comment data is processed.

Powered by WordPress and WordPress Theme created with Artisteer by N0AGI - Nagi Punyamurthula.